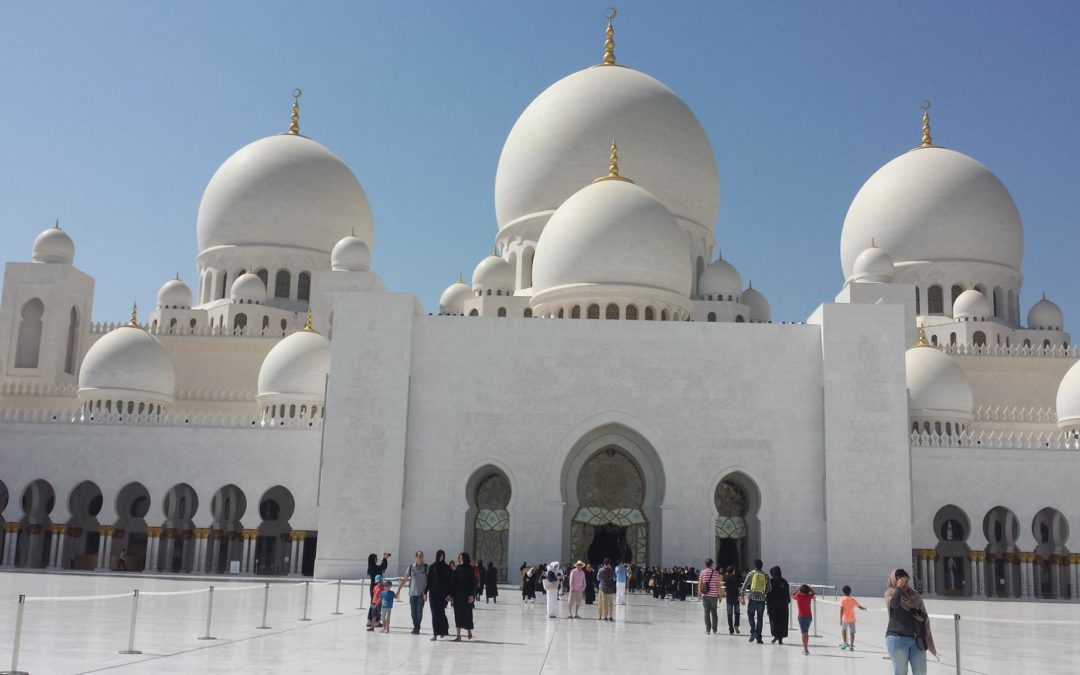 “Is it possible for me to take the day off work next week? It’s for a religious holiday, it’s the Muslim equivalent of Christmas – we will be celebrating ‘Eid’. But the thing is, this holiday depends on the lunar calendar, so depending on when the moon is sighted, can I either take Tuesday or Wednesday off?”, I asked nervously in one continuous breath, as I walked into my Danish boss’s office in Copenhagen at work.

“Sure Mariam, that’s not a problem. But you mean you don’t know which day your holiday will be on?” he asked, looking a bit confused.

“That’s right – I will know for sure on Monday night. It all depends on the moon you see. And sometimes different Muslim countries will celebrate ‘Eid’ on different days, depending on when the moon is sighted” I explained rather sheepishly, not sure how to explain this properly and feeling bad for not being able to give sufficient notice of the day I would take off.

As a Pakistani expat working in a largely Danish office and a predominantly Danish team, this was just one of many occasions where I had to explain my culture, background or religion to an audience for whom it seemed extremely foreign – to not even know in advance which day my religious holiday would fall on!

I had faced similar challenges living in the United States as well. I remember remarking to a colleague once, “Sure, I’ll send you that email tomorrow inshallah!”. Now, if you have lived as an expat in the Muslim world, or in the Middle East, you will be familiar with this word, which is used extensively at the end of every sentence to show intent and means “God willing”. But if you are born and bred in Texas like my colleague, then chances are you will probably look back at me in confusion and ask “what did you just say?”  Whoops. Occasion number #17658 when I had let an “inshallah” slip! 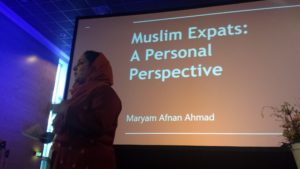 king about these and so many other experiences last month, when I attended the Families in Global Transition (FIGT) conference in The Hague and listened to a talk on “The Muslim Expat Experience” given by Maryam Afnan Ahmad, co-author of the book “Slurping Soup, and Other Confusions.” The talk made me reflect on various aspects of my own Muslim and expat identity simultaneously and brought forth many questions and some answers.

But first a confession. I identify as a Muslim. And I identify as an expat. But until, I was sitting there listening to this presentation, I realized I had never joined the dots and identified myself as a ‘Muslim expat.’ Why was this so? Clearly there were examples from my expat life such as the ones mentioned above, which were distinctly the experiences of a Muslim expat. So why had I not ever once mentioned that I was a Muslim expat? Why had I not written even one word or even one article on this part of my identity until now?

It took a lot of reflection over the next two weeks for some thoughts to crystallise.

As Maryam explained in her talk at FIGT, “there is no one Muslim expat experience.” I found myself nodding to this. Muslims are not a cohesive, homogeneous group by any definition. We are extremely different, with diverse experiences and different attitudes to our faith and to our expat lives.

My own Muslim identity is complex. When someone asks me “are you a Muslim?”, I usually reply “yes, but not a very good one.” Having grown up and lived in different cultures, my Muslim identity has been shaped, stretched, reformed and reinvented many times. I don’t pray five times a day, but I do try to fast during the holy month of Ramadan. I don’t cover my head, or wear a headscarf, hijab, niqab or a burka, but I do refrain from eating pork or any bacon products. I don’t read the Quran regularly, but when I am stressed, I do start reciting several Quranic verses for comfort that I learnt in my childhood. My name Mariam (the Muslim name for the Virgin Mary in Arabic) sounds rather anglicised with its spelling, and doesn’t really mark me as a Muslim per se, like a name like Fatima or Aisha might. Sometimes my Muslim background comes as a complete surprise to those who visit my home. I still remember the movers in Singapore who helped offload all our boxes from our container into our apartment. Turns out they were men who were mostly Muslim Malays, so when they unwrapped my prized blue tile mosaics from the Blue Mosque in Turkey with Arabic calligraphy, they asked in surprise “Ma’am are you Muslim?” When I replied yes, they worked harder and more efficiently than before! I was one of them, although it had not been apparent before.

I suppose that’s the thing. I don’t wear my Muslim identity on my sleeve, or on my head for that matter. My faith is private. It’s not something I’ll discuss if I have just met you. Its multi-layered and comes out in different shapes and forms, and sometimes when I least expect it. It might present itself in a heated debate or discussion on Middle Eastern politics. It might be reflected when I speak of my experience as a Muslim living in the United States post 9/11. It might be apparent in the book you see me reading on an airplane, “The Three Daughters of Eve” by my favorite Turkish author Elif Shafak who is excellent at dissecting the modern Muslim psyche.

In contrast, my expat identity is usually apparent very quickly. I will talk about raising our children in cultures different from our own, I will talk about learning German when I lived in Berlin and I will share the many expat issues I face such as keeping my career alive, making new homes, learning to start again etc. When I arrive in a new country, I don’t automatically look for a grocery store or a butcher who sells halaal meat. Many Muslim expats might, but I personally don’t. My father taught me that what matters is not halaal food, but a halaal income – if you earn an honest living, anything you buy with your hard-earned money is considered halaal = legal/lawful. Not your typical Muslim experience I guess, but that’s my point. Faith, and its interpretation is all supremely relative. Perhaps expat life has forced me to be more practical about these things. Keeping a fast in Massachusetts during winter when the New England days are short, is infinitely easier than fasting in Copenhagen with the long Scandinavian days in summer, when the sun doesn’t set until 10 pm sometimes!

Interestingly, I have never evaluated or assessed moving to a certain country or city based on how “Muslim-friendly” it was. When confronted with an international move, my focus was always on researching schools, security, jobs etc., but never on the availability of prayer rooms, reduced office timings for Ramadan or access to a neighborhood mosque. I have never needed to live in a Muslim country, to feel connected to my Muslim identity.

But my Muslim background is apparent in my love for travel, knowledge and education. Muslims have been great travelers throughout centuries as Maryam reminded me in her talk. From the great Muslim scholars like Ibn Batuta to the great Muslim Sufi poetry of Rumi, the adventures, love for knowledge and thirst for different cultures has shaped my expat identity.

Upon reflection and talks with some other Muslim expats, I start to understand that sometimes when confronted with the other; a foreign country, a foreign culture, a life abroad – some Muslims may cling to their old identities and start identifying more strongly as Muslims – maybe even more strongly than they would, had they remained in their passport countries. As one of my Muslim friends said: “if that’s how people are going to see you, you might as well own it.” Perhaps in an ever-changing expat world of living in different countries and the need for bridging cultures, it feels comfortable to identify with a part of you that will remain a constant in your life; no matter where you are living.

I had to mull on this perspective for some days. The reason it initially confused me, was because I realized the opposite had happened to me. Expat life, has made me reflect on what aspects of my religious and cultural identity were really important to me. It has made me pick and choose which aspects of my religious, cultural and national identity I keep and which I discard. Which rituals was I following simply because society expected that of me? And which holidays do I really identify with and want to keep and pass on to my children as part of their identities? Because, when you strip away society and societal expectations, only then can you understand what is truly important to you.

Expat life had helped me see which parts of my Muslim identity I cherished and valued and which customs I was only following, because that’s what everyone around me was doing. I realized that no matter where in the world I was, I would always celebrate ‘Eid’ and take a day off. I realized I wanted to teach my children how to read the Quran (but in Urdu or English) instead of forcing them to memorise it in Arabic, as I had been made to do in a language I didn’t understand or speak as a child. I realized that when it came time to decide whether to circumcise my son shortly after his birth (as expected in Islamic tradition), I felt very differently than how I had always assumed I would feel.

Expat life has constantly made me re-evaluate and re-assess how Muslim I felt. Was I upset at the Danish Cartoon controversy surrounding the Prophet Muhammad, as an expat living in Denmark? Did I want to join the protests happening in London against the Iraq War? How did I feel when my husband had to grant written permission to ‘allow’ me to obtain a drivers license and drive a car in Dubai?

Living in a Muslim Country as a Muslim Expat:

Which brings me to my current expat life. I currently live as a Muslim expat in a Muslim country. The United Arab Emirates has strict Shariah laws regarding many aspects of life here in Dubai. On the one hand, I identify with the local religious holidays, customs and practices. But on the other hand, Arab culture is as foreign to me as Greek culture would be to an Australian. So even though I live in a Muslim country, as a Muslim expat, there have been many new experiences, many learnings and many lessons on how the local culture impacts and shapes so much of our religious identities as well. And of course, the fact is that in Dubai (as elsewhere), you can meet all kinds of different Muslim expats. Some might tell you about their Muslim identities over a shisha smoking session, with every other word being a “mashallah” (praise be to God) or an “inshallah” (God willing). Others might invite you out to the local mosque and tell you how they feel they don’t belong here after you pray together.

So, if you are on the outside looking in, I must agree and conclude with Maryam’s advice in her talk at FIGT on the Muslim expat experience: “practice respectful curiosity.” Muslim expats come in all shapes and sizes; don’t make the mistake of stereotyping or judging one based on the other. And be ready to socialise, whether it’s at a shisha café or the local mosque. Sometimes, even as a Muslim, you never know which one it will be.