How to Handle an International Move with Expat Kids 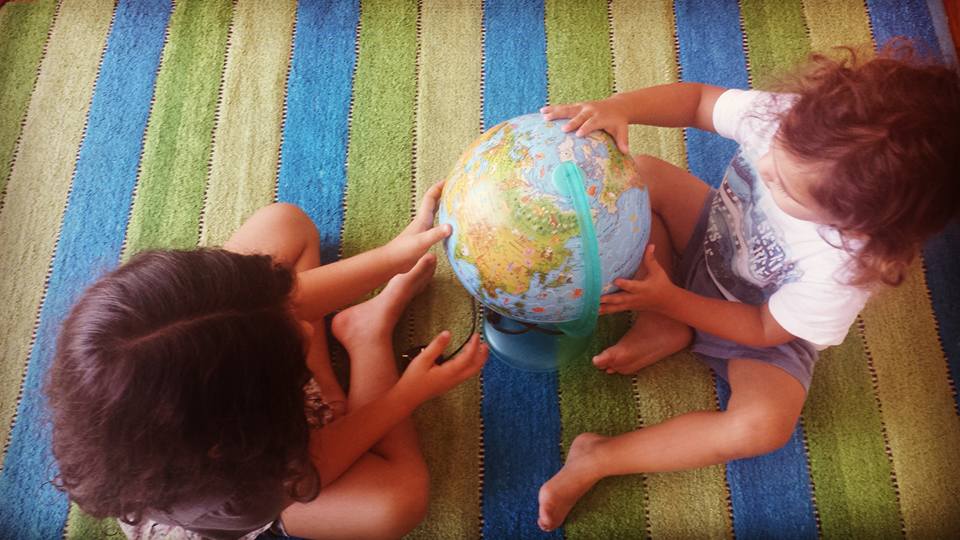 She gave the globe a spin, and as the continents, oceans and countries whizzed by, she looked up and asked “Mama, where is Australia?” Her five-year-old mind was interested in this country far away, because one of her friends from Dubai had just moved there, with her family. As I pointed to Australia on the globe, she looked up and sighed “wow, that’s really far away.”

I shared her grief. As an expat child raised in Singapore and Dubai, she had said enough goodbyes to friends in her short five years. Once because we moved, but other times because in expat heavy cities, the summer expat exodus meant she and I lost several friends each summer, around this time. Some expatriate to another country, while others repatriate to their home country. And some are still left in the expat country. It’s hard to be the leaver, but it is almost harder to be the one left behind.

Until we had kids, our approach to our expat life can best be described as “winging it”. Seven countries in 15 years is my expat story but I wonder how many countries my kids will live in by the time they are 18. In expat circles, there is this notion that the older the kids, the harder it is to move, (think of sulking teenagers having to say goodbye to their friends), but the truth is expatriation and repatriation with young kids is not any easier. There are different challenges involved, but each remains just that – a challenge.

Most nights, my conversation with my husband starts with some form of “is this global life messing up our kids?” Each move, each new school, each transition, each new language, each goodbye, and each new experience sometimes prompts a whole re-evaluation of our expat lifestyle and the havoc it might wreak on our children’s ability to form meaningful friendships and connections through childhood.

Understanding the effects of expatriation on expat kids was one of several reasons, I was eager to listen to the research, findings and discussions at the recent Families in Global Transitions (FIGT) conference in The Hague, in March 2017. As an expat writer and an expat parent, I was particularly interested in hearing how expat life and the constant moving and saying goodbye and starting at a new school in a new country was affecting our expat kids and how I could handle future moves with them in a way that minimized their confusion or sadness. The FIGT conference gave me not only very clear insights of the effects of expat life on kids but also helped me to meet others writing on this topic and read and understand research, articles and books written by cross cultural educators and parents in the field.

When Your Expat Kid is the Stayer:

Jane Barron; a youth intercultural transition specialist who writes about the impact of mobility on children for Globally Grounded, explains in her article 6 Steps Towards Being a Successful Stayer in an International School that “in an international school, there are three types of students: leaver, arriver and stayer.” Quite often the leaver is preparing for the impending move by saying goodbye to friends, while the arriver is the new kid who has just arrived and eager to make friends and settle in. Jane points out that “most international school support the arriver and the leaver, but what about the stayer? He is thrown into transition, yet his suitcase is still in the closet.”

Even though we are not moving this summer, my daughter is still dealing with transition and with saying goodbye to several of her friends. Through reading Jane’s article, I now realize the important of talking through the changes with her, acknowledging her feelings of sadness or loss and making an active plan for her to stay in touch with her friends. Little things like showing her on a map or globe, where her friend is going, helps her to contextualize the new life her friend will lead.

When Your Expat Kid is the Leaver:

When we moved from Singapore to Dubai, our daughter was only two and a half. I thought she would not understand or be able to grasp the gravity of the move but come moving day, when she saw the packers pack up her favorite toys, she grew aggressive and territorial. Even at her young age, she needed help handling the transition. I know when it is time for our next move (a question of when, not if), I will have to clearly explain to both kids why we are moving, and what that entails.

This idea was reinforced by Kristin Louise Duncombe in her talk at FIGT on ‘Raising Global and Mobile Children: Challenges and Solutions for International Families.’ She explained that the key factors towards impacting a kid’s reaction to a move are age, development stage, personality, temperament and family dynamics. It was important to remember the difference in each child’s temperament in his/her ability to process a move. An introverted child may have a harder time dealing with an international move, than an extroverted one. What was also interesting was Kristin’s advice to parent to “be real with your kids” – to talk about your emotions, acknowledge the ups and downs and be healthy role models for them in navigating change. I usually try to shield my children from all my complicated emotions during a move, but now realize it is far healthier to show them my sadness at leaving a place along with my excitement of starting a new adventure.

I also enjoyed listening to Maria Lombart’s Ignite presentation on dealing with loss as a child. She helped me as an expat parent to see, that globally mobile children face tangible losses (pets, places, belongings and people) but also intangible losses (language, belonging, experiences and personality). It is equally important to acknowledge both during a transition.

In their book ‘Third Culture Kids. Growing Up Among Worlds’, Ruth van Reken and David Pollock outline the key for a healthy transition, imagine building a RAFT: of Reconciliation, Affirmation, Farewell and Think Destination. Reconciliation means to let go of unresolved issues and mend bridges. Affirmation of what you had in a certain place and what that meant for you. An expat kid who is leaving can say to friends ‘thank you for being part of my journey.’ Farewell to places as well as people is important. Sometimes a farewell memento can help kids in the process of leaving too. And lastly ‘think destination’ means to prepare your family for where you are going, and to have knowledge of the place.

In the past year, I have thought more about how to approach an international move with my young kids (currently five and two years old). My personal rules for giving them stability have been to make sure we are going to be at a location for at least a minimum of three years. Once we are in a new country, I like to keep as much as possible – schools, house, neighborhood – stable and the same to counteract all the new experiences they are dealing with -country, language, culture, weather, friends etc. I do not like to switch apartments or houses while living in the same city. I do not like to switch schools or kindergarten for my kids unless necessary. Because they will be dealing with an international move at some point, I like to keep our time in a particular city uncomplicated. Too many frequent small moves within a city, followed by a large international move would be difficult and stressful to handle – for all of us.

I feel a lot more confident thanks to conferences such as the Families in Global Transition, that we are slowly understanding and learning more about the impact of mobility in shaping our children’s experiences in the 21st century. On the question of whether this experience of growing up around the world will mess them up – I hope not. But I do know that each move we will make from now on, will be conducted under the framework of giving maximum support and understanding to our children. This international and global life has opened new doors for them and their experience of diversity, tolerance and learning new cultures and languages has made for such a rich childhood.

For further reading on how to handle international moves with expat kids, here is a list of useful websites, books and resources that ‘And Then We Moved To’ would like to recommend:

Families in Global Transition (www.figt.org) founded by Ruth van Reken is a forum for globally mobile families and those working with them.

Expat bookshop (www.expatbookshop.com) founded by author Jo Parfitt and Summertime Publishing for the latest in books for the expat community. It has a section devoted to books relating to Third Culture Kids.

B at Home: Emma Moves Again, by Valerie Besanceney. Emma is only ten years old, but has already moved twice. Now, her parents are telling her the family is moving again. She’s furious, sad, nervous, and a little excited, all at the same time. Unsure of how to tackle these conflicting emotions, she turns to B, her faithful teddy bear. While trying to come to terms with the challenges of another move, what Emma really wants is just to ‘be at home’. As the journeys of Emma and B unfold, home changes once again, but home also begins to take on a new meaning that Emma can take with her wherever she goes.

Slurping Soup and Other Confusions, by Maryam Afnan Ahmad, Cherie Emigh, Ulrike Gemmer, Bárbara Menezes, Kathryn Tonges and Lucinda Willshire. The book aims to help children cope with the challenges of living internationally. Each story is followed by a related activity. The activities are suitable for three to 12-year old’s and include brainstorming, problem solving, party planning, family tree, and quirky word creations. The stories explore adapting to new environments, home and family adjustment, cultural differences, friendship changes and feelings of belonging.

Misunderstood – The Impact of Growing Up Overseas in the 21st Century, by Tanya Crossman. Misunderstood explores the impact international life can have on the children of globally mobile families – while they live overseas, when they return, and as they mature into adults. Similarities in their shared experiences (regardless of the different countries in which they have lived) create a safe space of comfort and understanding. Whether you grew up overseas, are raising children overseas, or know a family living abroad, Misunderstood will equip you with insights into the international experience, along with practical suggestions for how to offer meaningful care and support.