GERMAN PHRASES THAT MAKE YOU GIGGLE…AND SOUND LIKE A NATIVE 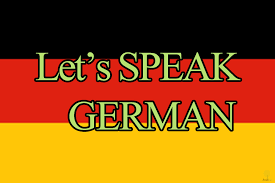 In the spring of 2007, I found myself as a newlywed expat in Berlin. My days consisted of taking intensive German language classes from 9 am – 4 pm everyday. However, I soon realized that when it comes to learning a new language, there are some things you don’t learn in class, but rather out on the street. Here are some extraordinarily useful and witty German phrases that might make you giggle, but you will sound  like a local if you use them, even if it’s your first time in Germany!

1. “Ich verstehe nur Bahnhof!” = “I understand only train station”
The first time I heard this, I couldn’t stop laughing. If someone is giving you instructions or directions to get to a place or explaining you something you can’t understand, the typical German response would be the above: “I only understand train station”, meaning you totally lost me afterwards with all that followed! When you say this, it will prompt the person to repeat what they are saying, perhaps more slowly or carefully or even in English if they suspect you are a tourist! 🙂
2. “Alles in Ordnung”? = “Is everything in order?”
The most common way to ask “how are you?” in German is to ask if everything is in order. The Germans pride themselves on their efficiency, organization, discipline, cleanliness and punctuality. These are all manifestations of “Ordnung” (order) which basically means a whole bunch of good things. No phrase warms the heart of a German more than to hear “Alles in Ordnung”, meaning everything is all right, everything is as it should be.
3. “Konnen wir uns duzen?” = “Can we say ‘you’ to each other?”
Perhaps you may have heard the joke when the former Chancellor of Germany Helmut Kohl turned to his counterpart Ronald Reagan and declared “you can say you to me!” What he meant was that lets be informal and use the informal ‘you’ when addressing each other and not speak in formal tones.
In English one addresses everyone as “you” but in German you have the option of addressing someone as “Sie”; the formal ‘you’ to be used with people you are meeting for the first time or do not know very well, or “du” the informal ‘you’ to be used with friends and family and people you know very well. Interestingly like in some other cultures, age is not a factor when determining whether to duzen or siezen – it took me forever to get used to saying “du” to family members much older than me!! When in doubt, always better to ask “konnen wir uns duzen?” to remove any chance of a social faux paus later on.
4. “Das gibts doch nicht!” = “That can’t exist!”
A wonderful German phrase which basically means “oh that simply can’t be” or basically: “you’ve got to be kidding me!” Is the train late by 2 minutes? Your response: “Das gibts doch nicht!” All the shops are closed on a Sunday? “Das gibts doch nicht!” It simply cant be true! Unfortunately while the first occurrence is certain to be rather rare, since trains are always on time in Germany, the second one is true so don’t think you can shop on a Sunday in Germany, all shops will be closed for a day of rest so make sure you plan ahead.
5. “Stimmts, oder habe Ich Recht?” = “Correct, or am I right?”
A tongue in cheek way of saying am I right or am I right when you want to imply you are definitely right about something! A very helpful phrase to use when in a heated discussion or debate with a German – it is sure to break the ice and bring forward a rueful smile.
6. “Er wohnt in J.W.D” = “He lives in J.W.D”
When you basically want to imply that something is really far away or someone lives really far off, in the middle of nowhere, then you say oh that’s all the way in J.W.D. It’s the equivalent of saying in English “he lives in Timbuktoo” – meaning somewhere really obscure! In fact so obscure that most Germans don’t even remember what J. W.D stands for!
7. “Hast du noch alle Tassen im Schrank?” = “Do you still have all your cups in your cupboard?”
An informal way of asking “are you crazy?”. If someone does something really crazy or impulsive, in English you might say “have you lost your marbles?”. In German you would respond by simply inquiring about the state of their mental health by asking if they still have all their cups in their cupboard!
8. “Ich glaube es geht los!” = “I think it goes off!”
A very useful German phrase to know when you think something is really unreasonable or if something is really expensive and you’ve had enough – you would get up in disgust and declare ” Ich glaube es geht los!” meaning i think I’ve had enough. Is the German football team losing 5-0 to the Argentinians? A German fan might declare “Ich glaube es geht los!” and leave the stadium in disgust.
9. “Noch ist nicht aller Tage abend!” = “Its not the eve of all days yet!”
When you want to tell someone to relax, it’s not the end of the world if Germany loses 5-0 to the Argentinians, you would say “Noch ist nicht aller Tage abend!” There’s still life beyond this!
10. “Das ist das Gleiche in Grun” = “Its the same in green”
If someone tries to convince you that one German restaurant is different or better than another across the street you might respond by saying “it’s the same thing in green” meaning you don’t see any difference whatsoever!
Do you speak German? I would love to hear of any other German phrases that you find funny!