RISE: A Growth Platform for Migrants in Dubai – How Expats Can Bring About Change

As expats, many of us move to a new country, and then ask ourselves: how can we make a difference in the local communities that we now call home? Some of us volunteer at the local animal shelter in Jakarta, others teach English to underprivileged school children in a small Chinese village in Qingdao, while some of us join an NGO that helps to deliver clean and safe drinking water to remote villages in Sub-Saharan Africa.

But if you live in Dubai, like I do, you cannot help but notice the ‘other’ expats; the migrant workers who come to Dubai to work as nannies, construction workers, gardeners, laborers and taxi drivers from countries like Pakistan and the Philippines. In 2013, the UAE had the fifth-largest international migrant stock in the world with 7.8 million migrants (out of a total population of 9.2 million), according to United Nations (UN) estimates. Migrants make up a majority, approximately 80% of the resident population of the UAE, and account for 90% of its workforce.

The Difference Between Expats and Migrants

Both expats and migrant workers come to the UAE on time-limited, short-term contracts to work here and then return to their home countries.

But what differentiates an expat from a migrant?

According to Padmini Gupta, co-founder of Rise, a Dubai-based wealth management platform for migrants, the answer is quite simple:

“The access to growth is very different for a migrant worker than for an expat. The banking system caters to the expats, to those with higher income levels” she explains.

With vast economic differences in earning power and saving potential, it is no wonder that opportunities for growth, skill development and career advancement are far and few for the typical migrant worker in Dubai. Unlike expats who have access to a wide range of wealth and financial services, migrant workers such as nannies have no access to banking services, so they send money back home to help their families but are unable to save in the long term for themselves.

So how can we start bridging the gap between an expat and a migrant worker in Dubai?

Rise is a growth platform to help migrants in the UAE manage their finances, learn new skills and build a better future. I had the pleasure to meet Rise co-founder Padmini Gupta last week to understand how Rise is helping to develop a sustainable growth path for millions of migrants in the Middle East:

“Banking unlocks growth potential. 68% of the actual population in the UAE is ‘unbanked’. 68% of the migrant population is earning under 5000 AED per month. These are the people who need the growth most” explains Padmini. 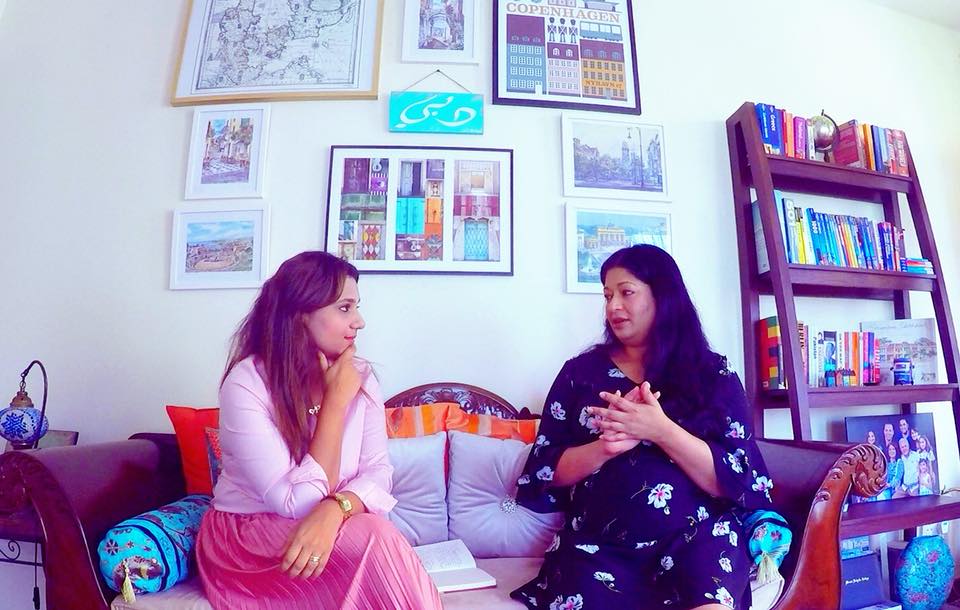 I sit down for a chat with Padmini Gupta, co-founder of Rise (right).

Rise has started by focusing on one target group to offer their services to: domestic workers such as maids and nannies, employed in many households across Dubai.

“One in every four women in this country is a maid or a nanny” highlights Padmini. Rise has thus partnered with a Sharjah based bank with branches all over the UAE to help over 2,000 nannies in the UAE to open up bank accounts. It has focused its efforts on helping the ‘unbanked’ nannies to have access to a bank account, a debit card and the opportunity to save. Giving them access to financial services, is the first step to help empower them.

The Idea for Rise

Padmini who was born in the United States but grew up in Dubai, explains how the idea for Rise came to her in April of 2015.

“A massive earthquake had hit Nepal and we had just hired a Nepalese nanny two months earlier. She was devastated. With her family suffering and her belongings ruined in the wake of the earthquake, she asked us for a considerable sum of money in assistance. And I remember wondering why she had no savings after working in Dubai for the past 15 years?” recounts Padmini.

After helping her nanny and scraping together the large sum of money, Padmini realized that her nanny’s story was not unique. Many migrant workers are busy working and they send money home to their families but are not able to save any for themselves or think about their future. This was not the story of one woman’s misfortune, but rather the misfortune of many migrant workers, living and working in the UAE.

With an illustrious career in banking in the United States, policy development work at Oxford University centered around financial inclusion, and previous experience working as a Global Leadership Fellow for the World Economic Forum in Geneva, Padmini realized she could put her expertise to good use. She joined forces with her husband Milind Singh a former strategy consultant, who also doubles as her business partner and the co-founder of Rise. 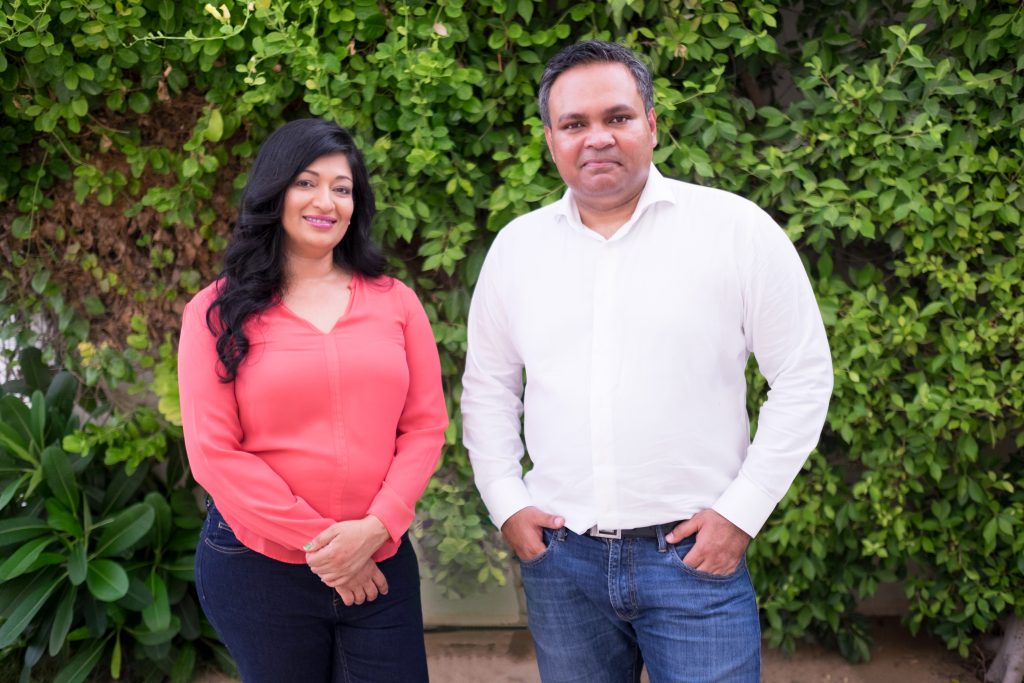 Dubai expats Padmini Gupta and her husband Milind Singh are the co-founders of Rise.

How Does Rise Work?

If you are a nanny or you are a parent looking to help your nanny benefit from Rise, the first step is to call rise at 800 gorise or email them at bank@gorise.co.  Padmini, and her team, can help you open an account for your nanny.  If your nanny wants to register herself, she can do the same.  There is no minimum balance and no minimum salary required. Rise will help you make the process easy and Rise also conducts financial literacy workshops to talk to Nannies on how to manage their income and start the process of saving.

Their recent ‘Nanny Salary Survey’ highlighted key facts and figures in terms of salaries. The average salary for a maid or nanny in Dubai is AED 1850 a month. By understanding the average salary for a nanny, Rise is also helping nannies to improve their skills and gain new ones in order to increase their employability.

It has partnered with leading local and international experts to bring exclusive training programs. Nannies registered on Rise can take reasonably priced courses on a wide range of important topics such as child nutrition, safety for children and on enhancing communication and language development for toddlers.

Lastly, Rise also runs a hiring platform through their Facebook page ‘Mary Poppins Dubai’.  It is designed to make the nanny hiring process easier, while allowing access for both nannies and parents to post for jobs and look for prospective employees.

Impacting Social Change One Nanny at a Time

“Imagine celebrating the fact that you have a bank account!” says Padmini, with a smile. This is exactly what one Dubai nanny did. One of the first nannies to open up a bank account, she celebrated the moment by proudly taking her family out for a celebratory meal. 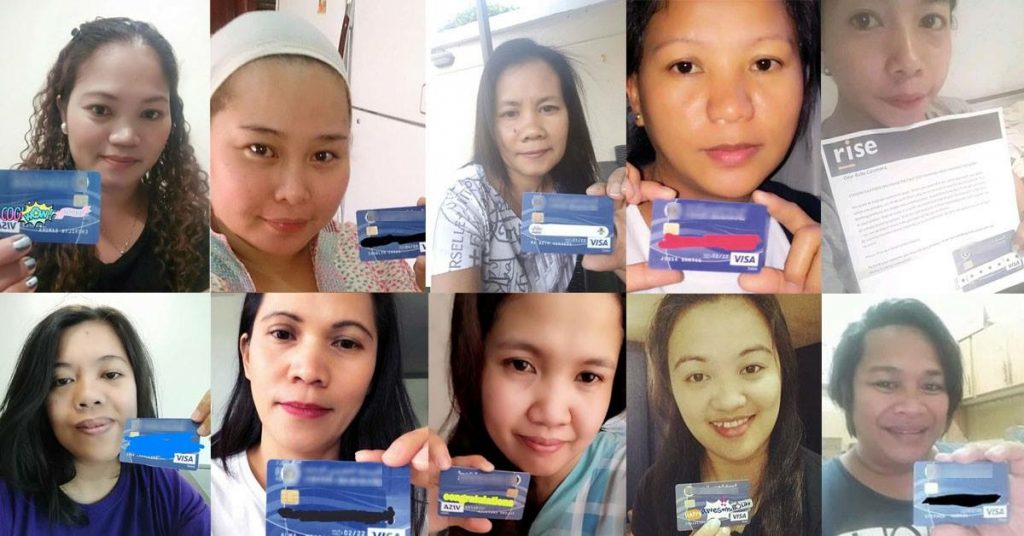 Some of the proud nannies holding their debit cards, obtained through Rise

Rise has also recently introduced the UAE’s Best Nanny Award. The award aims to show appreciation of all the hard-working nannies in the UAE. Its latest recipient Melanie Manansala who has been working in the UAE for the past 24 years, explains her story and what the award of 1 million pesos has meant for her here.

In the future, Rise plans to extend their services to other migrant workers too and increase the range of financial services offered to migrants. It aims to help migrant workers by offering more investment channels, insurance and lending options and the chance to grow their assets.

Migration is a dominant theme in the 21st century, and Dubai expats like Padmini Gupta are certainly working hard to ensure that growth and financial inclusion are accessible by all.

For more information on RISE:

For Parents: To see which courses are offered and their fees visit: https://www.gorise.co/courses/

To get in touch with Rise: https://www.facebook.com/GrowWithRise/ and on Instagram @growwithrise

This is a sponsored post, in collaboration with Rise. All opinions expressed here are my own.

About the Author: Mariam Ottimofiore is a Pakistani expat, writer and author. As an expat child, she grew up in Bahrain, New York City and Pakistan. She has been an expat for the past 16 years and has lived in the United States, the United Kingdom, Germany, Denmark, Singapore and the United Arab Emirates. She is the a co-author of the books Export Success & Industrial Linkages in South Asia (Palgrave Macmillan 2009) and Insights and Interviews from the 2017 Families in Global Transition Conference (Summertime Publishing 2018). She writes about expat life, raising a multicultural and multilingual family while moving around the world and global travel on her blog ‘And Then We Moved To’. Her expat writing has been published in Expat Connect Dubai, Global Living Magazine, Expat Living Singapore, Families in Global Transition and The Huffington Post, while her expat life has been featured on the Oprah Winfrey Network (OWN) for Super Soul Sunday. ‘And Then We Moved To’ has also been shortlisted as ‘Best Parent Blog of 2017’ by Time Out Dubai Kids. You can follow her writing on Facebook, Instagram and Twitter.